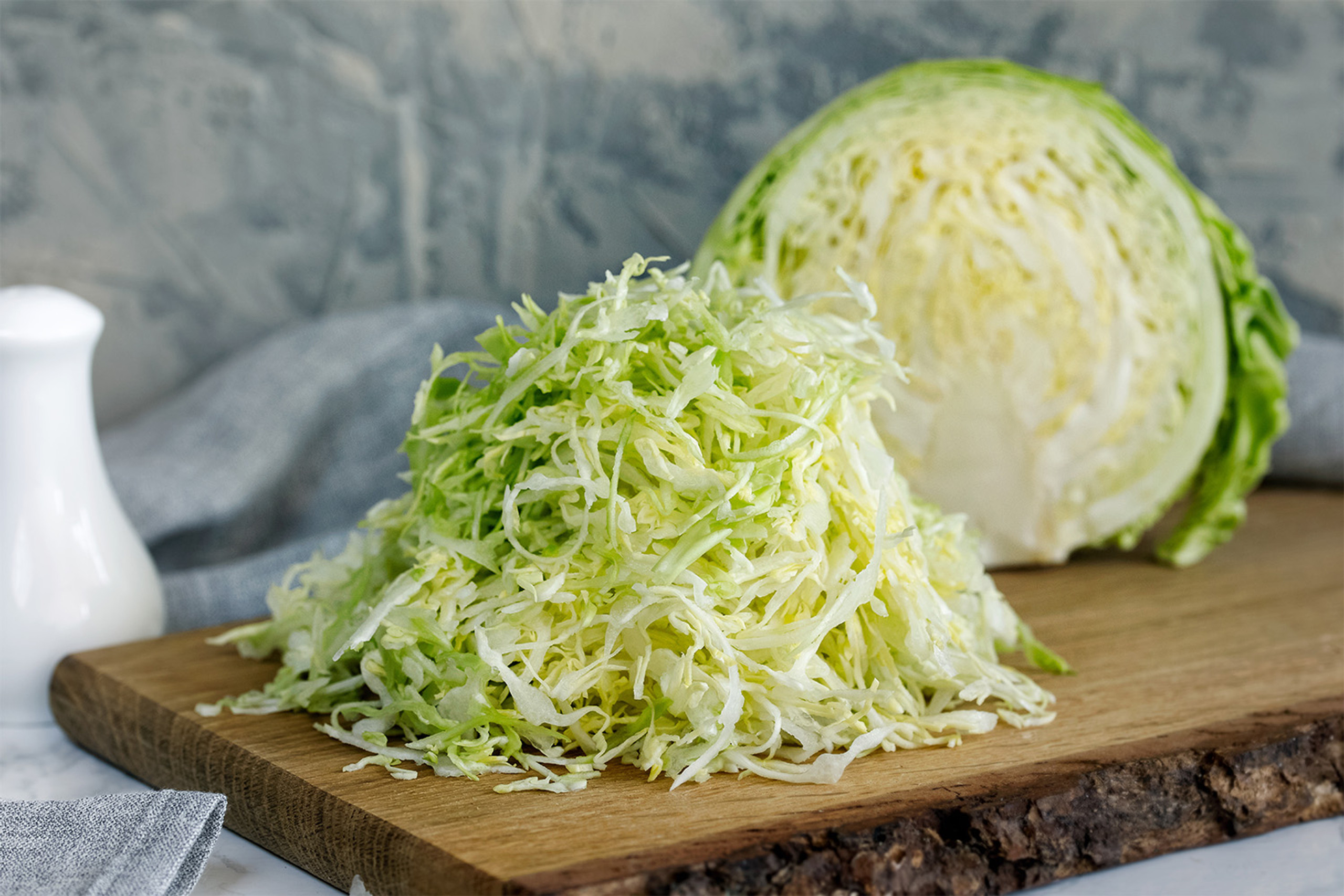 How To Cut Cabbage and Prepare It for Meals

They, along with you, tend to look at that head of cabbage and wonder just how to begin preparing it for a meal. Well, wonder no more, because here's everything you need to know about how to cut cabbage.

What You Need To Know About Cabbage

Cabbage might look similar to lettuce, but it's closely related to many other vegetables, including broccoli, brussels sprouts, and cauliflower. A head of cabbage is fairly large, and it comes in a number of different varieties, each of which works in several popular recipes. The most common types of cabbage are:

The type of cabbage you choose depends widely on the recipe you're making. However, each is sliced the same way when beginning the preparation process.

Cabbage is a staple of several Eastern European and Asian cuisines. It appears on tables in South Korea in the form of kimchi, a pickled Chinese cabbage. Cabbage and bean curds make an appearance in Chinese cuisine. Stuffed cabbage, sauerkraut, and boiled cabbage are common in Polish cuisine, and the vegetable is one of the many filling options for the tasty dumplings known as pierogi.

In addition, cabbage is included in salads and coleslaw, as well as the British dish bubbles and squeak. It's often included in Indian dishes and appears in spicy salads in Ethiopian cuisine.

With so many different options, it's no wonder that cabbage is so popular. All that you need to know is how to properly prepare it for whichever dish you plan on making.

How To Slice a Head of Cabbage

Cabbage can be tricky to slice because the inner core (which needs to be removed, as it isn't edible) is very dense and hard to cut through. Some recipes, such as stuffed cabbage or golabki need to use whole cabbage leaves, so the head needs to be properly cored in order to prepare the meal.

Other recipes only use parts of the cabbage, making preparation easier. Here's how you cut a cabbage, step by step.

Often, grocery stores sell the heads of cabbage with their outer leaves attached. These leaves tend to be tougher and more fibrous than the rest of the cabbage, so they need to be removed. While you can use them in soups and stews, in many cases, they are just composted or otherwise discarded. Just pull these leaves off of the head.

2. Slice the Cabbage in Half

After washing the head of cabbage and drying it thoroughly, place it upside down on a cutting board. Locate where the stem of the cabbage emerges from the bottom of the head, and then using a sharp knife, cut it straight through the stem, slicing the head in half.

3. Cut The Cabbage into Smaller Sections

Take the two halves of the cabbage head and slice each of them evenly in half. This leaves you with four quarters of the cabbage. You can now easily cut the stem away from each piece. Discard the stem.

From here, further slice the cabbage as needed. You can shred it on a mandolin for coleslaw or sauerkraut or cut it into slices for salads and other recipes.

Preparing a Head of Cabbage

After your cabbage has been properly sliced or shredded, depending on whichever version of it your recipe calls for, it's time to prepare the vegetable. Cabbage can be shredded and mixed with carrot shreds and other vegetables for coleslaw, or it can be sliced and placed on a sandwich.

In general, the recipe will instruct you on the preparation process. You might find that it needs to be steamed or braised, or even boiled for a few minutes before you wrap it around a mixture of seasoned ground beef, rice, and tomato sauce (also known as stuffed cabbage).

Since there are so many different possibilities when it comes to adding cabbage to your meals, the methods of preparation are seemingly endless as well. All that matters is the fact that you end up with a healthy, tasty meal on your plate that includes cabbage.

What Is Green Cabbage? | The Spruce